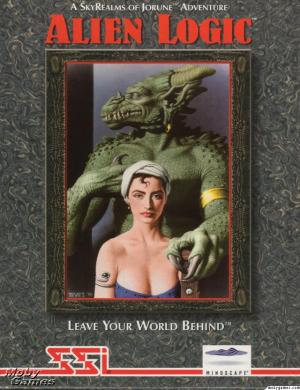 In the 21st century, human beings have all but destroyed their home planet Earth. Surviving humans found a shelter on a planet called Jorune. A civil war errupted, humans fighting the indigenous population; eventually, peace was achieved, and the various races found a way to co-exist with each other... all except one. The Shantha, one of the most ancient and powerful races on Jorune, adepts at the magical art of Isho, were not satisfied with the shape the planet has taken. 3500 years later, one of them, known as the Red Shantha, began attacking human settlements. The hero of the game is one of the villagers who have survived Red Shantha's attack. Having found the way to master Isho, the hero must rescue his friends and explore the planet, searching for the source of evil. Alien Logic is based on the Skyrealms of Jorune role-playing system. The player takes control of one character; there is no party in the game. While there is a story to follow, much of the game is open-ended, dedicated to exploring Jorune, searching for items, precious crystals (which increase the hero's parameters), and fighting enemies. The exploration mode uses a side-scrolling perspective; the player can switch to combat mode when an enemy is nearby. Combat takes place on the same screen as exploration, and is action-based. Combat relies heavily on magic (Isho); casting spells deplete the Isho bar. Spell sequences are called dyshas, which can be offensive or defensive. Preparing dysha combinations beforehand and then using them on the enemies (by clicking on them) is an essential combat strategy.