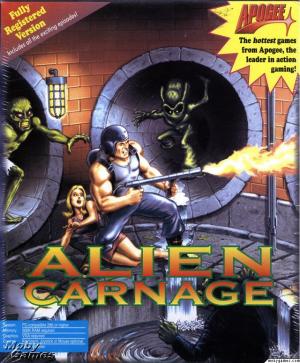 Alien Carnage (also known as Halloween Harry) is a follow-up to the 1985 game Halloween Harry, created for the Microbee System by John Passfield in 1985, but it has very little in common with the original game. In this side-scrolling platformer, earth is being invaded by aliens who turn humans into zombies in order to enslave them. Harry is the only saviour of earth, and he has to traverse different levels and rescue the kidnapped humans. There are many different weapons to collect, and most have a limited amount of ammo.