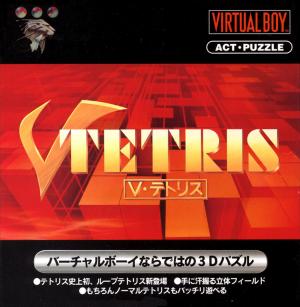 V-Tetris is a Miscellaneous game, developed by Locomotive Corporation and published by Bullet Proof Software, which was released in Japan in 1995. V-Tetris (Ｖ－テトリス) is a Japanese-exclusive Tetris game for the Virtual Boy. It is not to be confused with the similar Virtual Boy title 3D Tetris, as the two games are entirely different. V-Tetris, unlike 3D Tetris, is mostly the same as the original Tetris games, the only difference being the cylindrical puzzle mode in which blocks could be placed in a 3-D spiral. Text borrowed from: http://nintendo.wikia.com/wiki/V-Tetris