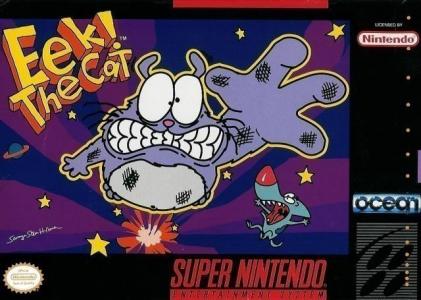 KOOM-BY-YAH! Hold on tight for hair-raising adventure with your favorite Saturday morning superhero - in his Super NES debut. Now you can play with EEK! every day of the week!!! Get zapped bonked and splattered through six hilarious adventures as you try to rescue Annabelle from loony aliens... Reunite Pierre with his Squishy Bear brothers... Save a sleepwalking granny from a zoofull of accidents... Catch Joey the orphan's runaway Christmas present... And put your tail on the line nine times against Sharky the sharkdog... It is a revised port of Sleepwalker, a 1993 video game previously released on the Commodore Amiga.