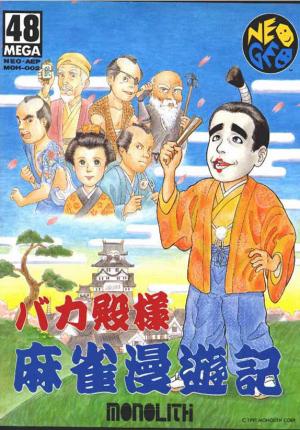 The third Japanese mahjong game released on Neo Geo hardware is based on a comedic variety show set in feudal Japan. It is the only game in the Neo Geo library to have explicit nudity. Bakatonosama Mahjan Manyuuki (loosely translated to Foolish Feudal Lord's Mahjong Journey) is a comedic riichi mahjong (two-player variant) game developed and released by Monolith for arcades (running Neo-Geo MVS hardware) and the Neo Geo AES (both exclusively in Japan) on December 20, 1991. The second (and last) arcade game released by Monolith (after Minasan no Okagesamadesu! - Daisugorokutaikai), Mahjan Manyuuki is another licensed mahjong game based on a Japanese variety show (Shimura Ken no Bakatonosama). While it's not considered an erotic "strip mahjong" game (popular in that era), it does feature explicit nudity (the only game in the MVS and AES libraries to do so). Like other Neo Geo mahjong games, it can only be played in single-player, includes memory card support for saving progress, and can optionally be played with the standard joystick and button layout.