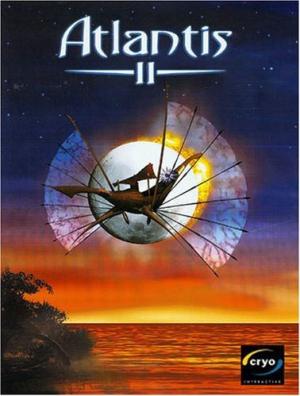 Atlantis II (Known as Beyond Atlantis in North America) is a fantasy adventure computer game developed by Cryo Interactive and published by Dreamcatcher Interactive, and released in 1999. It's a sequel to Atlantis: The Lost Tales. However, unlike its precursor, not much of the game is based around Atlantis. It was followed by Atlantis III: The New World. In this adventure game, take Ten, the Bearer of Light, through his journey to Shambhala to confront the Bearer of Dark so that balance can be returned to the Universe. To find Shambhala, he must gather the pieces that make up the "road to Shambhala" from different locations and time periods - China, Ireland and the Yucatán. You begin aboard a ship in the mountains of Tibet, which acts as a home base. As the pieces are found and put in place, Ten is mystically transported to exotic locations and will become different characters. Each "chapter" can be played in any order since each is self-contained with its own puzzles, objects and people. Although each chapter is autonomous the final reward of each one is another piece of "the road to Shamballa". Yucatán The character in the Yucatán chapter is Tepec, a loyal follower of a local city's king. Tepec's kingdom is in trouble because its protector-god, Quetzalcoatl (the Feathered Serpent), has fallen asleep and as a result great misfortunes happen to the kingdom; the corn crop is dying and a rival king makes a campaign to conquer Tepec's kingdom. So Tepec is assigned with the mission to go to the land of the dead, Xibalba, and awaken Quetzalcoatl to receive chulel, the divine blood which has life giving powers. Ireland Ten is transformed into Felim, a monk living in an Irish monastery in the early centuries of Christianity. He discovers a living remain of an ancient Irish king and then begins interacting with a set of characters from an old myth which is written in a book in the monastery library. His final goal is to help the characters get to the end of the story. China In this chapter Ten is in the body of a travelling Chinese civil servant who is stuck in a monastery because a ghost-shadow is blocking the entrance. As water supplies are running short, he decides to use the help of the Master of Directions to travel to a Chinese version of the land of the dead to consult an immortal excorcism master. Shamballa Shamballa is a fantasy place, which acts as a final screen of protection between the home base and the Dark's prison. Queen Rhea, a character from the prequel of the series is waiting there to link the story between the two games and guide Ten to the final level of the game, which is no other than the sunk Atlantis.