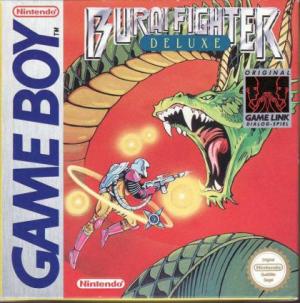 The player starts out with a relatively weak cannon but can upgrade to ring, laser, and missile weapons, which are much more powerful. The player can also choose from three difficulty settings: Eagle, Albatross, and Ace; but the fourth difficulty setting, Ultimate, must be unlocked. One proceeds by controlling the character in 8 directions and can shoot in a different direction from the direction he is looking. Burai Fighter is a single player two dimensional automatic sidescroller. It has three difficulty levels to choose from. At the start, the screen moves from left to right, but it can move in all four directions and even change directions in the same level. The player is expected to keep up, because getting stuck on the edge means you die. You start out with a basic gun that you can fire in all eight directions. You can hold the fire button to lock your firing position. You float through space blowing up robots that sort of look like animals most of the time. At the end of a level you must defeat a boss to continue to the next level. At times, you may find a gap at the side of the screen. If you time it right and push in that direction, the orientation of the screen will change and take you into a secret room with some power ups. However, the higher difficulty levels have fewer secret rooms and your timing also needs to be perfect. This means you can quite simply walk into a death trap. The game is fairly linear otherwise, but there are a few forks in the road where you can either travel on the left side or the right side of the screen for a little while. If you pick the wrong side, you need to be an exceptionally skilled player to make it out of there.