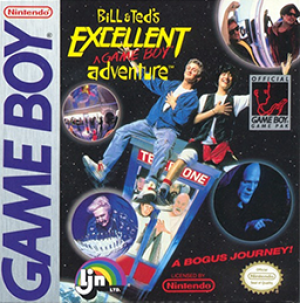 DeNomolos has hatched another plan to alter history in his favor. He has stolen special orbs called Time Fragments and scattered them all across time. Now Bill and Ted must travel across time to retrieve the time fragments to prevent the future from altering. But it won't be easy for the San Dimas duo. As DeNomolos has the aid of the evil robot Bill and Ted, plus he has brainwashed Death and some historical figures to stop them along the way. Each level takes place on a single screen. Players must collect scattered time fragments while jumping platforms, climbing ladders or ropes, and avoiding enemies. Because this is a Game Boy game, all sprites are very simplistic as both Bill and Ted have almost identical game sprites. In addition, enemies are only differentiated by their actions.