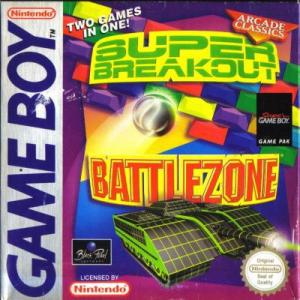 Battlezone: A standard enemy tank in the player's sights in the military training version The Bradley Trainer. Gameplay is on a plain with a mountainous horizon featuring a memorable erupting volcano, distant crescent moon, and various geometric solids (in vector outline) like pyramids and blocks. The player views the screen, which includes an overhead radar view to find and destroy the rather slow tanks, or the faster moving supertanks. Saucer-shaped UFOs and guided missiles occasionally appear for a bonus opportunity. The saucers differ from the tanks in that they do not fire upon the player, and do not appear on radar. The player can hide behind the solids or maneuver in rapid turns once fired on to buy time with which to fire himself. Common play in the US could run from 25 cents to a dollar per game, depending on machine setting. The typical setting is for 25 cent play, with three tanks. A standard enemy tank is worth 1,000 points, a supertank 3,000 points, and the flying saucer 5,000 points. The guided missile is worth 2,000 points when destroyed. Each of these targets can be destroyed with a single shot from the player's tank. An extra life is awarded when the player's score reaches 15,000 points, and a further tank is then awarded at 100,000 points. No additional tanks are awarded until the score counter rolls over at ten million, and additional bonus tanks are again awarded at indicated scores of 15,000 and 100,000. The game only includes one hostile enemy on the game board at all times; the player never has to battle two enemy tanks at once, or a tank and guided missile. The UFO can appear on the screen at the same time as an enemy tank, and it can occasionally be destroyed by enemy fire. The geometric solid obstacles are indestructible, and can block the movement of a player's tank. However, they are also useful as shields as they also block enemy fire as well. There was a bug in some machines which caused very high phony scores into the seven digits to be posted (after a player would enter his initials). Good players could actually reach this level after an hour or two of play. SUPER BREAKOUT: In Super Breakout, there are three different and more advanced game types from which the player can choose: Double gives the player control of two bats at the same time—one placed above the other—and two balls. Losing a life occurs only when both balls go out of play, and points are doubled while the player is able to juggle both balls without losing either. Cavity retains the single bat and ball of Breakout, but two other balls are enclosed on the other side of the wall, which the player must free before they, too, can be used to destroy additional bricks. Points are increased for this, but triple points are available if the player can keep all three balls in play. Progressive also has the single bat and ball, but as the ball hits the paddle, the entire wall gradually advances downwards step by step, gaining in speed the longer the ball lasts in play.