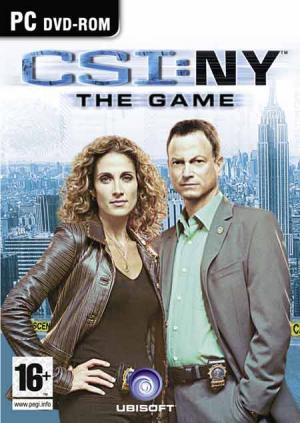 CSI: NY – The Game is a video game based on the CSI: NY television series. This is the sixth CSI game released, and the first for CSI: NY. As with the previous CSI games, there are five cases to work on. However, the game has taken a drastic graphical change, opting for a stylised 2D cartoon look, instead of the rendered 3D graphics of previous games in the CSI franchise. The game will allow you to control a CSI (Mac or Stella) and solve cases, collect evidence and solve puzzles. You will also be able to interrogate suspects with branching dialogue options, and depending on your tone or line of questioning you may find the suspects refuse to co-operate, or tell you everything you need to know. This is Legacy Interactive's first CSI game. They previously created the Law and Order videogames. As of April 2009, UBISOFT released the final case ("Derailed"). This case requires game patch 1.01 (it can be installed if the PC has an active internet connection). Mac Taylor becomes the prime suspect on the case when his DNA is discovered all over the body of a dead man.