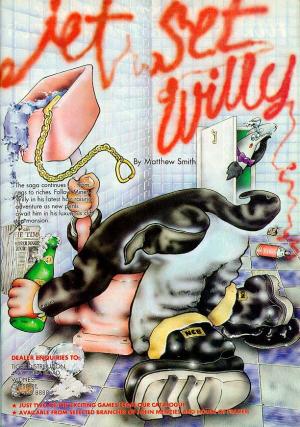 Jet Set Willy is a flip-screen platform game in which the player moves the protagonist, Willy, from room to room in his mansion collecting objects. The game is an early example of a nonlinear title since, unlike the screen-by-screen style of its prequel, the player can explore the mansion at will. Willy is controlled using only left, right and jump. He can climb stairs by walking into them (jumping through them to avoid them) and climb swinging ropes by pushing left or right depending on what direction the rope is swinging. The play area itself consists of 60 screens making up the mansion and its grounds and contains hazards (static killer objects), guardians (killer monsters which move along predetermined paths), various platforms and collectable objects. The collectable items glow to distinguish them from other items in the room.