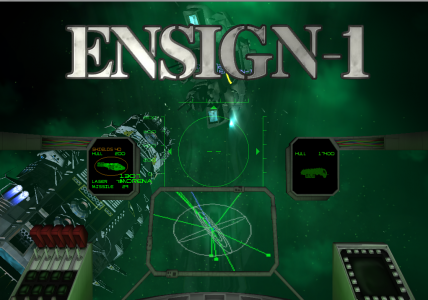 n Ensign-1 you play the role of a space fighter pilot returning from a deep space colonization mission. On arrival back to our own solar system, you find Earth has been colonized by a hostile alien force. It's now up to you, with the help of your mothership, the Ensign-1, to take it back Ensign-1 allows allows for complete freedom in approaching objectives. You can fight from the safety of your spacecraft, or land and exit to explore space stations and carriers on foot. You can commandeer any spacecraft in the game, no matter how big or how small. Defend an asteroid base, or take the fight to the enemy with a huge mothership, friends manning turrets, it's your choice. The game also features a multiplayer mode where players can explore a randomly generated galaxy, either fighting co-operatively to clean out enemy fighters, or battling each other for supremacy.