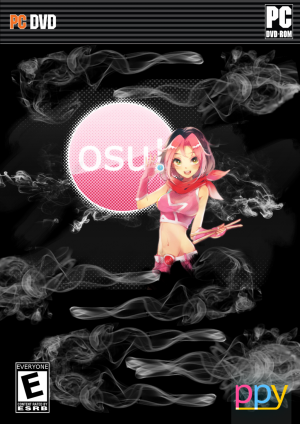 osu! is a freeware rhythm game originally for Microsoft Windows. Game levels are called beatmaps. In each beatmap, a song will play and different hit elements (hit circles, sliders and spinners) will appear on the play field. Players must use a pointing device to manipulate these elements in time with the playing song's rhythm in order to earn points. While the mouse is considered the most popular input device, combinations of mouse, Tablet PC, graphics tablet and keyboard can be utilized. The main objective when playing osu! is simply for players to hit, complete, and clear enough hit circles, sliders and spinners to keep their health bar, which drains at a steady rate throughout the game, above 0 until the song is over. More experienced players will often strive for a more specific and difficult goal, like improving their high score or grade on a particular map, usually by attempting to time their hits better and avoid as many misses as possible to increase combo multipliers. The game also features three other gamemodes: Taiko, Catch the Beat, and Mania. Taiko, based on the Japanese arcade game 'Taiko no Tatsujin', is a mode where the player hits red and blue notes as they scroll across the screen. Catch the Beat involves moving a character to catch fruit as they fall from the top of the screen. Mania is a Beatmania/Stepmania inspired mode where the player presses keys (which correspond to individual lanes on the screen) as they fall.