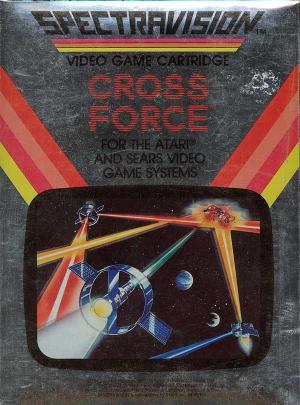 In the intriguing Cross Force, players control a pair of cannons which remain at diametrically opposite ends of the screen at all times (if centered, the two cannons line up vertically; moving them toward the edges of the screen splits them apart diagonally). A succession of alien spacecraft and creatures take center stage in the middle of the screen, and players must line the two cannons up to most efficiently deal with all of the enemies while also using the smallest amount of fuel possible (end-to-end sweeps of the screen, while deadly and impressive, simply aren't practical). Some of the enemies, not content to just be evasive, return fire, providing another way for the player's cannons to be destroyed.