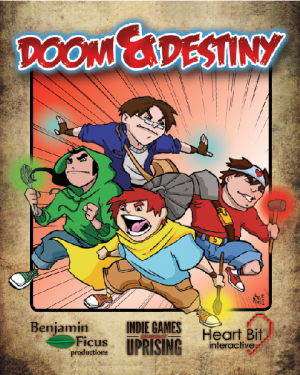 Nerds storm fantasy and it's EPIC! Doom and Destiny is an old-school RPG with tons of attitude, adventures and comedy! Help Nigel, Mike, Johnny and Francis, four nerdy friends, to fight their way through the funniest quest they ever had! Trapped in a fantasy world and mistaken for Heroes, those four nerds will have to deal with long journeys, hundreds of enemies, villains, super villains and even an Unnamed super villain! Will they be destined to become real Heroes? Will they manage to return home? Will they manage to find a good Pizza restaurant in this weird fantasy world? More than 30 hours of gameplay Huge customization of your party! Over 500 items, between potions, weapons, armour and accessories! Over 300 enemies to defeat with over 200 Special Powers! 39 Secrets, 39 Side quests, 7 Dwarfs and 1 Flying Spaghetti Monster