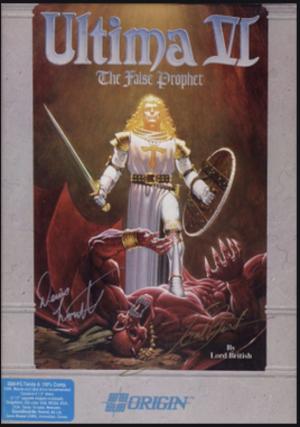 Several years after having restored Lord British to his rightful position as the monarch of Britannia, the Avatar is captured by demon-like creatures and placed on a sacrificial altar. His friends Iolo, Shamino and Dupre appear just in time to save him. In the Britannia castle, the Avatar learns that his abductors were gargoyles, a race of enigmatic creatures who have recently invaded Britannia and occupied the shrines of Virtue. As the Avatar embarks on a quest to liberate Britannia, he begins to gain insight into the gargoyles' true motives, and realizes that it is his duty to achieve peace and understanding between the two races. Ultima VI is notable for having a fully continuous world. There is no "world map" in the game; all the locations are seamlessly connected to each other, turning the game world into an open environment. Compared to the previous installments in the series, the game focuses more on quests and exploration rather than on combat. The latter no longer involves separate screens; battles occur during exploration, without any transitions. The turn-based system from the previous games has been preserved. The interface has been re-designed, the original key-bound commands co-existing with selectable command icons and mouse-based interaction. The game world is more detailed than in the previous games, with a large number of various objects that can be manipulated or added to the inventory. Conversations are more extended, with a wider selection of topics, including many personal ones unique to specific characters. The player is also able to conduct extensive conversations with the Avatar's companions, as well as split the party and control the characters separately. Some important topics may be highlighted during text display, to facilitate further dialogue, which requires the player to type the desired conversation topics. Like in the predecessors, the player is free to explore the game world from the beginning of the game, and visit locations in any order. Following the main quest and obtaining specific items and information is necessary to complete the story; however, the player can also opt to bypass a large part of it by using previous knowledge of the game or outside help. The FM Towns version has full voice acting for all the conversations, in English and in Japanese.