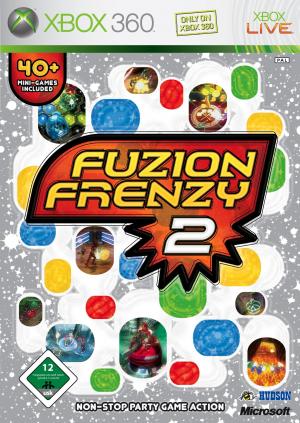 Until four years ago, Fuzion Frenzy was the most popular tournament on Earth and was broadcast live to all corners of the world. However, due to the extreme competitiveness of the players, the leaders of Earth banned it, fearing its influence on the general population. Recently, however, the world's leaders have struggled with the problem of overpopulation, and have come up with a plan for the citizens of Earth to immigrate to space. To encourage immigration, the leaders have brought back the Fuzion Frenzy tournament, but with a change they have set up game zones on various other planets. The people of Earth welcome this news, especially the announcement that the leaders have reinstated the six most famous players, who are returning with renewed enthusiasm. Fuzion Frenzy 2 combines over 40 mini games with futuristic arcade action, custom tournaments, Xbox Live features and more to create the ultimate party game exclusively on Xbox 360. Play with your friends and family to find out who is the strongest among you.