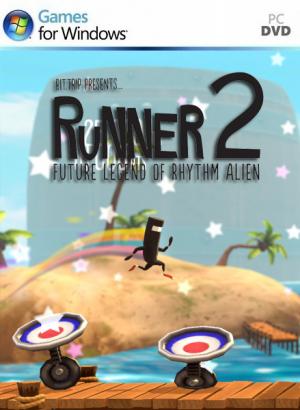 Bit.Trip Presents... Runner2: Future Legend of Rhythm Alien, generally shortened as Runner2, is a 2013 side-scrolling platformer developed by Gaijin Games. The game is the direct sequel to Bit.Trip Runner and has been released as a downloadable title available on the PlayStation 3, PlayStation Vita, Xbox 360 and Wii U consoles, Microsoft Windows, OS X, Linux and on iOS. The PC, Mac, Linux, and Wii U versions were self-published by Gaijin Games, and the X360 and PS3 versions were published by Aksys Games. Cutscenes and menus are narrated by Charles Martinet of Mario fame. While Runner2 has a lot in common with its predecessor, its polygonal graphics mark a significant departure from past entries in the Bit.Trip series. In an interview with Push Square, Gaijin Games co-founder Mike Roush cited the studio’s urge to “spread its wings a bit” as the inspiration behind the change.[1] Since its release, Runner2 has been received warmly by press and players alike.[2