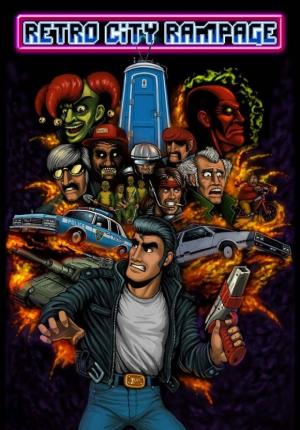 In the city of Theftropolis in 1985, "The Player", a thug for hire, decides to gain work as a henchman of a major crime syndicate led by the Jester. Three years later, during a bank heist gone wrong, The Player runs into a time-traveling telephone booth, which he decides to steal from its owners. The booth flings him forward an indeterminate amount of time to the year 20XX. Upon arrival, the booth breaks down and a man named Doc Choc (a parody of Dr. Emmett Brown from the Back to the Future films) arrives in his own time-traveling vehicle and rescues the Player, mistakenly believing him to be a time-traveling hero. The Player must work with Doc Choc to gather the rare parts needed to repair the time booth, while avoiding law enforcement, his own former employer Jester, Bayside High School students, and Dr. Von Buttnik, Doc Choc's rival and the head of R&D at A.T. Corp, a tech corporation and The Player's former employer, whose CEO, Sweat Bomber, wishes to use the time machine to control the electronics market.