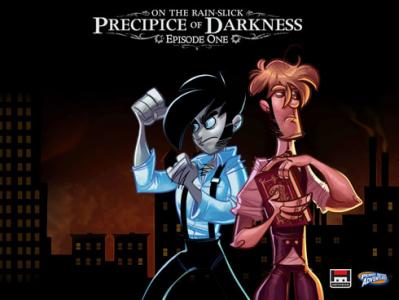 Penny Arcade Adventures: On the Rain-Slick Precipice of Darkness, Episode 1

Penny Arcade Adventures: On the Rain-Slick Precipice of Darkness is an episodic action-adventure role-playing video game series based on the webcomic Penny Arcade. Episode 1 was released on May 21, 2008 on Linux, Mac OS X, Windows, and Xbox Live Arcade, and was later released on PlayStation Network on October 23, 2008. There is a demo available which can be upgraded to the full game. It was later released on Steam, with new Steamworks support. Episode 2 was released on Linux, Mac OS X, Windows, PlayStation Network, and Xbox Live Arcade on October 29, 2008. The game was originally planned to be distributed episodically across four games. In March 2010, developer Hothead Games chose to devote its resources instead to DeathSpank, discontinuing its development of further episodes.[3] Subsequently, prose chapters constituting the plot of Episode 3 were presented on Penny Arcade's website.[4] In August 2011, Zeboyd Games announced that it would be developing Episode 3[5][6] albeit in a completely different graphical style.[7] The third episode was released on June 25, 2012[8] and subsequently Zeboyd announced that they were working on Episode 4, which was released on June 6, 2013.[9]