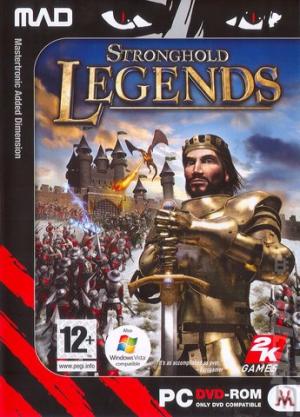 Stronghold Legends is a 2006 castle-based real-time strategy game by Firefly Studios. It follows in the series of Stronghold and Stronghold 2. Gameplay[edit] Unlike the previous Stronghold titles, Legends gives the player a choice of different starting rulers with different troop types (including King Arthur and his knights of the round table, Count Vlad Dracul, and Siegfried of Xanten). Other new features include cooperative multiplayer against computer-controlled opponents and the choice between different gameplay options for online play (Deathmatch, King of the Hill, Economic War, and Capture the Flag). Each faction has new unit groups unique to each faction. Most special units have their own unique ability, which must be recharged after they are used. Dragons are also available to every faction, but have a set lifetime. All other special units remain on the map until they die. In story mode the players not necessarily bound to their factions special units. For example, King Arthur can make use of the Ice Tower instead of the Round Table for more balanced game play. Stronghold Legends has been made using a similar graphics engine as Stronghold 2 - the game appeared to be a minor rehash of the previous game on the first inspection. However, playing it revealed that the graphics were considerably improved and new music tracks had been added. More units were available; features like crime were removed entirely, minor changes like this have altered the gameplay experience slightly. It was included in the Mastertronic range of games in the UK, showing its popularity.