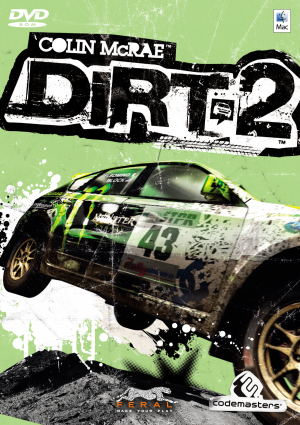 Dirt 2 (known as Colin McRae: Dirt 2 in the Americas and stylised, DiRT 2) is a rally racing game released in September 2009, and is the sequel to Colin McRae: Dirt. It was developed and published for the Mac OS X in September 2011 by Feral Interactive. This is the first game in the McRae series since McRae's death in 2007. It was announced on 19 November 2008 and features Ken Block, Travis Pastrana, Tanner Foust, and Dave Mirra. The game includes many new race-events, including stadium events. Along with the player, an RV travels from one event to another, and serves as "headquarters" for the player. It features a roster of contemporary off-road events, taking players to diverse and challenging real-world environments. The game takes place across four continents: Asia, Europe, Africa and North America. The game includes five different event types: Rally, Rallycross, "Trailblazer", "Land Rush" and "Raid". The World Tour mode sees players competing in multi-car and solo races at new locations, and also includes a new multiplayer mode. The sequel Dirt 3 was released on 24 May 2011.