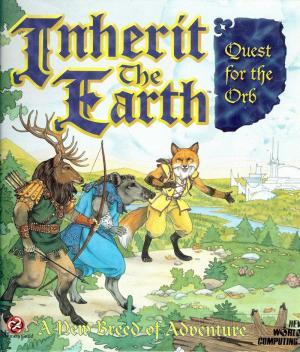 Inherit the Earth: Quest for the Orb

In a far future, mankind is extinct and Earth is populated by several tribes of anthropomorphic animals – collectively referred to as the Morph – who have achieved a level of technology and societal sophistication roughly equivalent to European civilization in the High Middle Ages. The humans are enshrined in legends as having been the ones who gave the Morph prehensile hands, mouths capable of speech, and the ability to think and feel, but the Morph have very little understanding of their long-lost forebears, who exist now only in stories, ruins and a few technological relics.