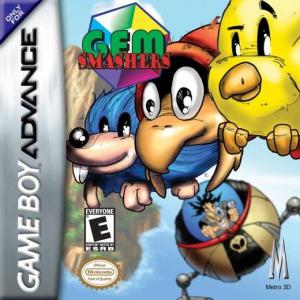 Gem Smashers is an action puzzle game where the object is to free trapped animals by smashing colored gems. Players control one of three prehistoric critters in their quest to eliminate gems of the same color before time expires. Yet before players can smash the gems, they must first transform their character into the appropriate color by finding the correct power-up. Only then will players be able to eliminate all the gems and uncover the hidden exit where the imprisoned animals can escape. Game modes include Story, Arcade, and Vs. Battle, with three additional variants unlocked during the course of play.