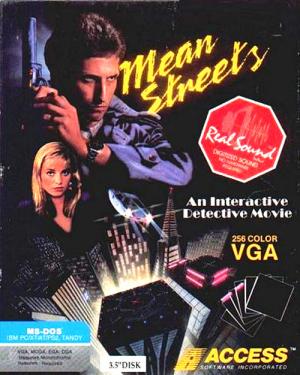 Private investigator Tex Murphy is hired to investigate the murder of a university professor. It turns out that he was one of eight scientists involved in Project Overlord, a mission to remotely control people. You soon learn of the deaths of other related figures. Suspects may include the British intelligence head, a surveillance company owner, and the professor's daughter. Tex's first adventure (and the only one released for systems other than DOS or Windows PCs) takes you through the seedy West Coast world of 2033. The game is icon-driven, with object puzzles less significant than detective deduction and character interaction. Mean Streets features dozens of characters to interact with by asking questions or offering bribes. Fights often arise, but a diplomatic approach is more successful with characters whose guilt is unproven. Although it is largely an adventure game, travel between cities involves piloting your Lotus Speeder in a flight simulation section.