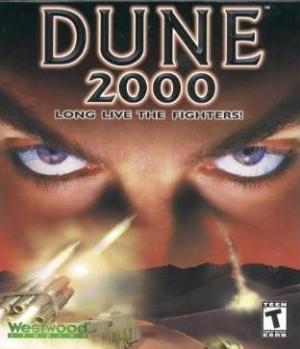 Dune 2000 is a remake of the classic Dune II updated for Windows. In this Real-Time Strategy game, you can play one of the three houses, the evil Harkonnen, the greed filled Ordos or the noble Atreides. Each has different sets of units and tactics while maintaining an overall balance. Unlike the original, the cutscenes happen after every mission, with live-cast this time, already seen in Westwood Studio's Command & Conquer franchise. A 16-bit color mode was the next step for their RTS genre, boosting up the graphics in Dune 2000. Everything from the original is back - sandworms, the spice, the Fremen, the known structures and the map of the planet, even the intro cinematic is a 3D enhanced version of the original one. Each house fights differently. The noble Atreides have air-superiority and rely on their honour and alliance with planet natives, the Fremen. The insidious Ordos rely on guerrilla tactics and superior technology, as well as mercenaries. The evil Harkonnen just go brutal, with no care for lives of their own troops or destruction as longs as they are victorious. Unlike the Windows version, the PlayStation version of the game is fully 3D.