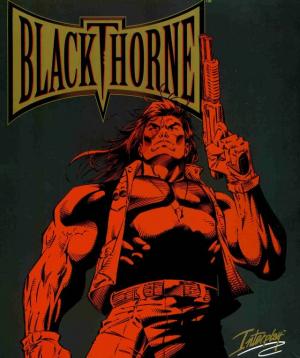 The planet Tuul was a peaceful place, until the evil warrior Sarlac used the power of the Darkstone to take control. Blackthorne's father, the good King Vlaros, sent him to Earth just as his kingdom crumbled around him. Now, twenty years later, Blackthorne is grown and must return to Tuul to free it from the clutches of Sarlac. Blackthorne is a platform action game played from a side-view with non-scrolling backgrounds. It has certain similarities to Prince of Persia, being set in maze-like environments and focusing on exploration and occasional puzzle-solving. Blackthorne fights enemies by shooting at them. His default weapon, a pump action shotgun, can be upgraded throughout the course of the game. Various types of bombs can be used to damage enemies, blow open doors, or destroy generations. Keys must be often found to gain access to new areas.