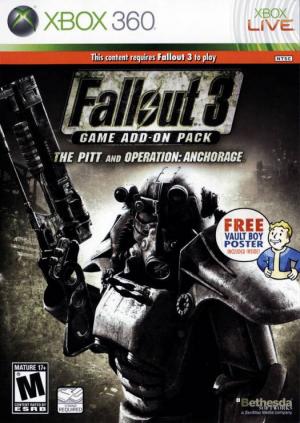 Operation: Anchorage[edit] Operation: Anchorage is the first Fallout 3 downloadable content pack, and takes place as a virtual reality "military simulation" in the main game where the player character is stripped of their equipment and is forced to use the replacements provided. The content focuses on the titular event in Fallout '​s alternate history. During the Great War, the United States Army liberated Anchorage, Alaska from Chinese forces. The pack contains several new quests, new items, and adds four new achievements. Gameplay within the simulation is different than the main game; health and ammo are replenished by stations in certain areas of the simulation world, items functionally do not suffer from decay, and enemy corpses disappear instead of allowing the player to loot them for supplies. Operation: Anchorage was released in North America and Europe on January 27, 2009 on Xbox Live and Games for Windows Live.[8][9] Although the content was scheduled for release on the PlayStation 3 in June 2009, the final week of June's PlayStation Store updates did not include it. Bethesda released information suggesting that the delay was due to their desire to iron out all of the bugs before release as well as test compatibility between DLCs.[10] Operation: Anchorage, along with The Pitt, were released on October 1, 2009, for PS3.[11] The Pitt[edit] The Pitt is the second downloadable content pack. It allows the player to journey to the industrial raider town known as The Pitt, in the remains of Pittsburgh, Pennsylvania. The pack features several new weapons, new armor and clothing items, four achievements and around four to five hours of gameplay. The Pitt was released on March 24, 2009 on Xbox Live and Games for Windows Live, but was quickly removed due to glitches in the gameplay which made the Xbox 360 version of the expansion unplayable. Further investigation was performed by Bethesda and Microsoft, and on March 25, 2009,[19] the expansion was again uploaded to Xbox Live, and was made available again that afternoon. For those who downloaded it on March 24 in the morning, glitches were still apparent. A new version was available on Xbox Live on April 2, fixing freezing issues many players had encountered with the previous version.[20] A retail disk was released at the end of May 2009[21] containing this and the Operation: Anchorage downloadable content. It was released for Xbox 360 and Games for Windows. The downloadable content is copied to the hard drive and function as it would had it been downloaded. This pack was released for the PlayStation 3 at the same time as Operation Anchorage on October 1, 2009.