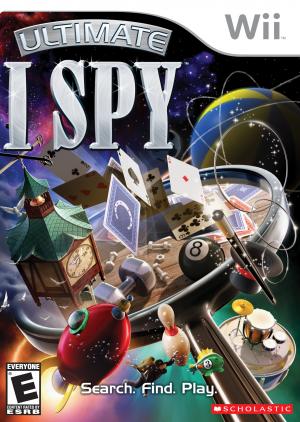 Play I SPY Like Never Before! I SPY takes a revolutionary turn that will have you up and moving! Play paddleball, throw darts, juggle, and more to solve immersive 3-D riddles. Solving riddles uncovers a mysterious machine and unlocks a heart-stopping game that reveals a special surprise! Plus, grab a friend and compete for bragging rights in the Game Room fetauring 10 multi-player games. Revolutionary I SPY Experience - 3-D riddles, action-oriented play and multiplayer features introduce an interactive I SPY experience like no other. 3-D Immersive Environments - For the first time in an I SPY game, 3-D riddle screens allow players to navigate through 360º and 180º environments with multiple angle views--searching above, under and between objects. Move to Solve Riddles - Solve 40 I SPY riddles actively! Use the Wii Remote and Nunchuk to search the scenes, pick up objects and engage in activities like connect-the-dots, juggling or playing maracas to finish the riddles. Intriguing Mystery - Solving riddles reveals pieces of a mysterious machine. Complete all 40 riddles to unveil the machinge. Scavenger Hunt - Follow the clues to search for objects throughout all the riddles and bring the machine to life! Heart-Stopping Climactic Game - Break a sweat in a final game to power-up the machine through an intense series of movements with objects such as a boomerang, a yo-yo or a tennis racket that you've collected over the course of the game. Multi-Player Games - Compete in 10 replayable games, boasting multi-player options and leaderboard features. Fly rockets, play paddleball, throw darts, or win races.