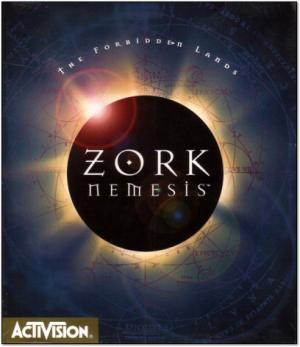 Zork Nemesis: The Forbidden Lands is a graphical first person adventure game in the style of Myst, mixing logic puzzles with live-action FMV sequences which advance the story. The player views each location from a first-person perspective, and can rotate the camera 180 degrees to get a full view of your surroundings. Like other Zork installments, the game contains humorous elements, but in general its story and atmosphere are darker, including images and themes such as decapitated heads and human sacrifice.