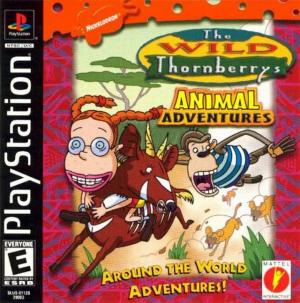 Players join Eliza and her globetrotting family of nature documentarians as they travel to exotic locations in search of rare and endangered animals in Wild Thornberrys: Animal Adventure. Nigel has decided to highlight severely endangered animals for his next documentary so The Thornberrys will need to explore animal habitats, avoid traps and solve puzzles as they make their way through the adventure. Players travel to seven destinations including Egypt, Vancouver, Kenya, Columbia, Belize, Iceland, and Tasmania. After choosing among any of the seven levels in the beginning of the game, you'll watch a short cartoon of The Thornberrys' describing the level's plot. Players can use Eliza's special ability to talk with animals to discover clues and receive special power-ups, while Darwin, Donny, Marianne and Debbie climb mountains, open secret passageways, swing on vines, and talk to the animals.