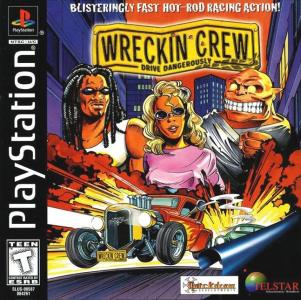 In the tradition of Super Mario Kart and Motor Toon Grand Prix comes Wreckin' Crew, a cartoon-like racer that emphasizes the use of various power-ups to keep your opponents from finishing before you. Up to two players can choose one of three modes: Arcade Race, which is a single race on your choice of tracks; Time Trial, where you can work on your speed; and Competition, which involves embarking on a series of four races in an attempt to win one of the championship cups. While only the Training Cup is initially available, you can participate in more challenging races after placing first on normal difficulty or higher. You'll also earn a video clip for each of the eight characters you use to win the Competition (plus two hidden), which can be saved and viewed at a later time in the Film Room. The four courses include Sydney, New York, Mediterranean and Theme Park. In addition, a bonus Stunt Track will give you a chance to collect as many power-ups as you can by driving over ramps before time runs out.