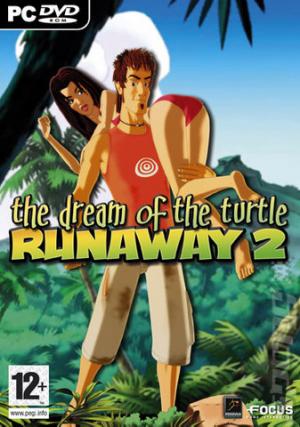 Runaway: The Dream of the Turtle

Runaway 2: The Dream of the Turtle (or Runaway: The Dream of the Turtle) is a point and click adventure game released by Péndulo Studios, S.L. in 2006. It's a sequel to Runaway: A Road Adventure. The French version of the game was the first available for purchase, followed shortly by the German version, both published in fall 2006. Other versions like the original Spanish version and the English localizations were kept on hold until 2007 due to publishing issues, most notably with its homeland, Spain, where a special collector's edition was released in order to please fans. Runaway 2 was first released on Microsoft Windows and then subsequently ported to the Nintendo DS in 2007 and Wii in 2009. The sequel and third installment of the series is Runaway 3: A Twist of Fate and was released on November 26, 2009. On October 17, 2013 French publisher and developer Bulkypix released Runaway: The Dream of the Turtle Part 1 for iOS (iPhone, iPod touch, iPad).[1]