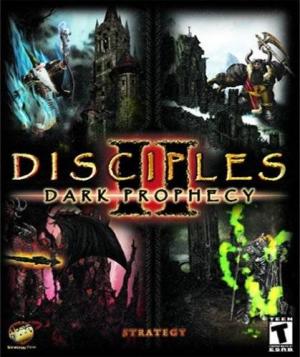 Party-based tactics and story-driven strategy return with all new graphics, animations, and sound in this sequel to 1999's critically praised Disciples: Sacred Lands. Instead of introducing any major plot twists or radical gameplay alterations, Disciples II is designed to build upon the strengths of the original title, enhancing the distinct blend of role-playing options and strategic challenges and continuing the epic storyline. The narrative of Disciples II begins about a decade after the great war of the first game left the land in a state a battered chaos. Once again, players can choose to lead one of four opposing factions, each with the same general goal of dominance over the land and each approaching the conquest from its own distinct perspective. A character known as the Chosen One takes his place among the player's faction, applying his heroic purpose to the particulars of the nation's cause. The focus on long-term strategy and party battle tactics from the first game is retained in this sequel, though further attention has been given to the role-playing aspects of the game with more fully developed, interrelated storylines. Greater choice in character development comes with expanded advancement trees and leader abilities. Many more sub-quests and side-adventures are also incorporated, but designed not to interfere with the meat-and-potatoes strategy that defines the series.