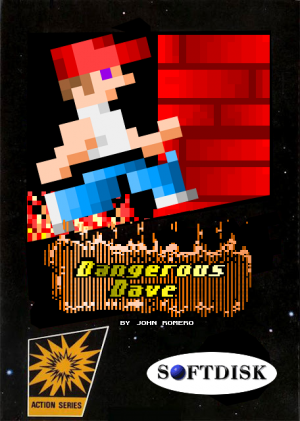 In 1990, Softdisk Publishing publishes Dangerous Dave in the Deserted Pirate's Hideout! (also known as Dangerous Dave in Trophy Trouble, Dangerous Dave), a puzzle-solving game for the DOS system. Offering action genre, it is now an abandonware. One of John Romero's earliest games before he became world-famous as one of id Software legends, Dangerous Dave is a fun platformer similar to Super Mario. You are Dangerous Dave, a little precocious kid who must find ten skateboarding trophies that your nemesis Clyde Cooper hid in a pirate's hideout. Gameplay in Dangerous Dave is nothing you haven't seen if you have played other platform games. What makes the game memorable and a lot of fun, however, are the many cool secret levels and the great sense of humor. Your enemies include creative monsters with names like WeirdWeeds, FearsomeFire, and WickedWater, all of which have unique attacks and characteristics. Level designs are excellent, showing much of Romero's knack that would become a hallmark in id Software games. With a lot of secret levels, humorous monsters and gags, and simple but fun gameplay, Dangerous Dave is a solid shareware game that paves the way for id blockbusters.