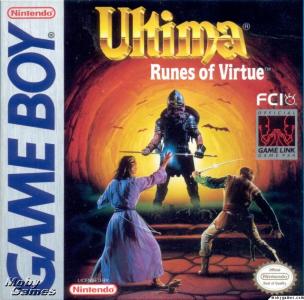 Ultima: Runes of Virtue is an RPG that was developed by Origin and published by Fujisankei Communications International, Inc for the Nintendo Game Boy in 1991. Unlike the other games of the Ultima universe, this is more of an action-adventure game, similar to games such as The Legend of Zelda, with a strong focus on solving multiple puzzles throughout dungeons. No party members are available, and the main character is one of the four companions of the Avatar, either Shamino, Dupre, Iolo, or Mariah Interestingly, the game is capable of multi-player, making it the first Ultima to offer this option.