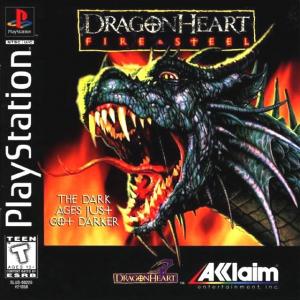 Dragonheart: Fire and Steel was released to the public in 1996, and is a 2D side scrolling beat 'em up based off of the movie of the same name. Players take on the role of a retired knight who must return to action and remain true to the oaths he took long ago. An evil prince's tyranny threatens the land, and the knight (who was a former dragonslayer) can only defeat this scheming noble with the help of a friend who just happens to be the last surviving dragon on Earth. Players must punch, kick, and slash their way through multiple levels in their quest, facing off against both weak and powerful enemies bent on stopping them. At the end of each level boss characters stand ready to slay the player, who must defeat them to continue, for retreat is not an option. Rendered and digitized graphics are used in the game to represent the backgrounds and characters respectively, though the title runs in a low graphic resolution.