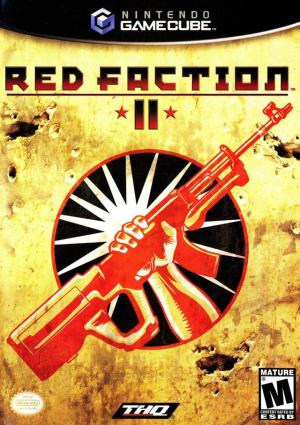 The sequel to developer Volition's first-person sci-fi shooter moves away from the setting found in the original Red Faction. Instead of exploring labyrinthine caverns from within an underground mining colony on Mars, players roam futuristic cities on Earth. An evil dictator named Sopot has condemned the player's character (Alias) to death, along with a handful of other soldiers, for inciting a rebellion. It doesn't take long before the group breaks free, thus beginning the arduous task of reclaiming Earth's freedom from a totalitarian regime. Attempting to prevent this from happening are armies of cyborg soldiers, spider mines, sentry droids, and other enemies, but players have an advantage missing from the first game: five brothers-in-arms fighting as a team. The teammates, Tangier, Repta, Quill, Shrike, and squad leader Molov, each demonstrate distinct abilities and personalities as they fight. Quill is a quiet soldier who is an expert sniper, for example, while Shrike is a rowdy braggart. The soldiers are automatically under computer control, so players do not have to worry about issuing commands or planning out intricate strategies. The situation dictates what each teammate will do in a particular mission. Sometimes a squad member will drive one of the several different vehicles and aircraft as players provide the firepower, while other times they will follow and offer cover fire. The Geo-Mod engine from the first game is present in this version as well, allowing players to destroy buildings and shape the terrain using an assortment of high-powered weapons, including submachine guns, assault rifles, and grenade launchers. Veteran actor Lance Henriksen (Aliens, Millennium) provides the voice of Molov, and up to four players can battle each other on a split screen. Originally developed for the PlayStation 2 by Volition, this GameCube port was handled by THQ's internal development team at Cranky Pants Games. Enhancements made over the PlayStation 2 version include higher texture resolutions and more color in the environments, custom animations, and special lighting effects for more visual flair. The storyline, modes of play, and features are otherwise the same. Red Faction II is the sequel to the popular first person shooter, Red Faction, which debuted on the PC and PS2 in 2001. Red Faction II is run on an enhanced version of Volition's Geo-Mod engine and incorporates an in-depth storyline. Players will go on multi-objective mission with a whole arsenal of weapons and items at their disposal. Players are able to control a variety of vehicles and fight with elite squad members at their side. Red Faction II introduces refined graphics, advanced AI, customizable computer opponents for multiplayer and even new multiplayer game modes.