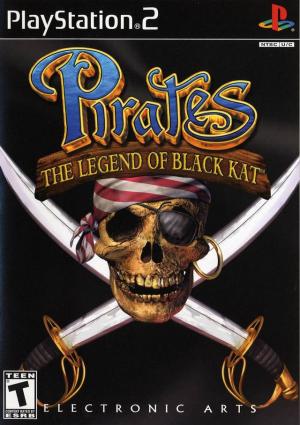 Pirates: The Legend of Black Kat

More an action-adventure game than a straight naval sim, Pirates: The Legend of Black Kat is designed to offer PS2 and Xbox gamers the chance to live the free but dangerous life of a true pirate. Players will explore five strange new lands that hold unimagined treasures for those brave and skilled enough to claim them. Battle and conquest are also important ingredients in a pirate's lifestyle and combat takes place both on land and on the high seas. The player's character is quick with a sword and can increase her swashbuckling skills with experience. Similarly, wealth gained from adventure and victory allows the pirate to upgrade to larger ships with more deadly weaponry. A dozen unique fighting vessels will become available to skilled captains, along with special accoutrements that afford the ships extra powers. Sea battles involve a realistic combination of positioning and timing, as tall ships align themselves to fire on enemy vessels from port- and starboard-mounted weapons and time must be spent reloading the powerful cannons and guns after each shot. The ability to repair damage on the fly is also an important strategic consideration in ship-to-ship fights. Though the gameplay of this 3D adventure is oriented towards fast action, several elements of role-playing are also incorporated, to move the story along and involve the player more deeply. The lead character Katarina de Leon plots a thoughtful course for her career on the open seas. The "Black Kat" sets sail to uncover mysteries and position herself in circumstances that will increase her overall status among other pirates, securing a position of power. In addition to Katarina's well-developed storyline, the game's "Captain vs. Captain" battle mode allows a more combat-intensive, freeform style of play. Pirates ? The Legend of Black Kat, formerly known as Pirates of Skull Cove, is Westwood's next-generation pirate game with epic ship battles and thrilling swordplay, starring Black Kat. Take to take to the high seas as Black Kat and master a dozen pirate ships from the simple gunboat to the massive power of a man o' war. Discover and explore increasingly dangerous and fantastic island worlds and develop Black Kat's swordplay skills to master the dagger, cutlass and saber to defeat evil pirate bands and loot their treasures.