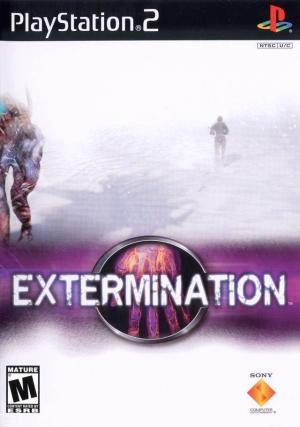 Brave PS2 gamers face off against hordes of viciously mutated creatures in this fast-paced shooter adventure from Deep Space and Sony. Extermination puts the player in the role of a highly-trained Marine Special Forces operative, Dennis Riley, who has orders to investigate a distress signal coming from a top secret base located in the empty frozen wastelands of Antarctica. Armed with a Special Purpose Rifle that can be upgraded with various scope, ammunition, and shotgun enhancements, the hero arrives to find that a mysterious plague has broken out in the facility and caused all life forms to mutate into deadly and evil creatures. Players must eliminate the threat of the virus and the hostile creatures it has created, all without becoming infected. The game is played from a third-person perspective, and all of the environments are rendered in real-time, allowing the camera to cinematically swoop around for the best view possible. The camera can also be configured into a manual first-person view aim, allowing for extremely precise shooting as well as a guide to the general layout of the environment. Extermination for the PlayStation 2 derives its roots and plays similarly to the survival horror game Resident Evil, but in a new twist to the genre, players will have to worry about becoming infected with the virus that has swept through the Fort Stewart installation. The infection level is measured by a percentage, and once that percentage reaches 100 percent, a parasite begins to spread throughout your body. Your health is dramatically reduced and certain elements (such as water) decrease your health percentage greatly. If you do not get a special treatment known as the MTS and find a medical bed in the installation, the infection takes over and turns you into a zombie-like mutant.