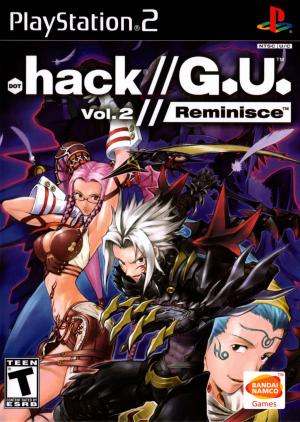 The second release in a series of three, .hack//G.U.: Vol. 2 -- Reminisce takes place in a fictional MMO environment called The World. As in previous releases of .hack, The World features elements of online gaming without the actual connection. Gamers interact with people they might find in a real MMO, take on quests, and adventure across a large environment as they increase their level. In this version of The World, gamers find the once-utopian landscape is now a player killer's (PKers) heaven. A bug in the game is blocking the log-off ability to all fictional gamers; effectively locking them into The World. Now, bands of PKers prey on every character in their path hoping that the slaughter knocks them out of the game and back into real life. Gamers take the role of Haseo, a killer of players who is stuck in the game. Haseo must work his way through The World by interacting with other character, defeating enemies in dungeon sprawls, and by completing assigned objectives. Navigation through the game requires the use of Warp points located around the map.