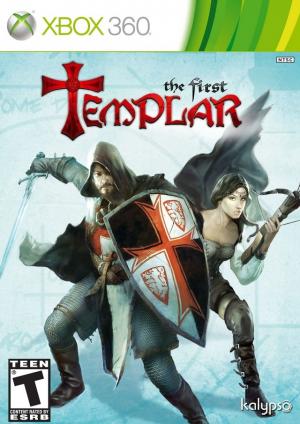 The First Templar is a third-person action-adventure game, with a historical-fiction setting and two playable main characters. The game takes place during the late 13th century, in the pre-dawn of the Enlightenment. Its story follows two unlikely companions: a French Templar Knight and a young noblewoman who has been accused of heresy and driven from her homeland. Single players can control either one of the characters, allowing the computer to control the other and switching between the two to access the most useful skills from one situation to the next. In the game's two-player drop-in cooperative mode, each player controls a character, working together to battle enemies and solve environmental puzzles. The characters grow more powerful with experience, as players custom-develop them up a branching skill tree. Weaving through themes of justice, conspiracy, and the secrets of the Holy Grail, the narrative calls on players to contemplate their actions in context, as even the most righteous cause may be carried out in a gruesome and unscrupulous manner. The First Templar was developed by Bulgaria's Haemimont Games, creator of adventuresome real-time strategy games with deeply researched historical settings, including Celtic Kings, Imperium Romanum, and Tzar.