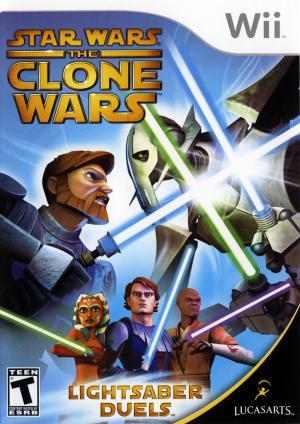 Star Wars: The Clone Wars - Lightsaber Duels is a fighting game based on the animated movie Star Wars: The Clone Wars which is the pilot for a TV series of the same name. The story is set between Episode II and III in which the player takes the role of either Obi-Wan, Anakin or Ahsoka Tano. During the course of the campaign he has to win one-on-one lightsaber battles against enemies like Count Doku. The controls are designed for the unique Wii controls which means the player needs to swing his Wii remote with the correct timing and the game converts it into in-game fighting moves. If the player performs certain hit combos which are different for every character the force meter fills up which can be used to hit the enemy with powerful force attacks. From time to time there is a quicktime event if the two sabers are in content: then the players have to perform given attacks.