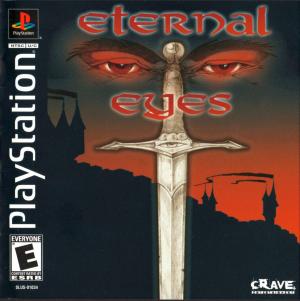 The Mappets have shielded the land of Gross from war and destruction for close to 1,000 years. But the evil General Vorless has stolen the Soul Sword and is using it to destroy the Mappets. With the Mappets out of the way, he hopes to awaken Luna, the Goddess of Destruction, and rule the land unopposed. Luca and his sister Elena are two orphans, living in a small house in the kingdom of Gross. They have two good friends - Mouse and Nicol. One day, while exploring a local cave, the four youths find a mysterious jewel. Later, they travel to the city of Goondocks, where they find a similar jewel - along with a note left to them by Luke's and Elena's parents. They learn that their parents belonged to an ancient race named "Eternal Eyes" - people who could control inanimate dolls called Mappets. Now the four heroes have to learn the power of controlling Mappets, and to stop a villain from resurrecting the Goddess of Destruction. The heart and soul of the game is battle, with all of the battles taking place on 3D isometric fields inhabited by 2D sprites. Every character has unique skills that must be employed during the fight to succeed. Luckily, there are also 150 Mappets that can be collected to help give you an edge in combat. Play ETERNAL EYES and help Luca save the world and the Mappets.