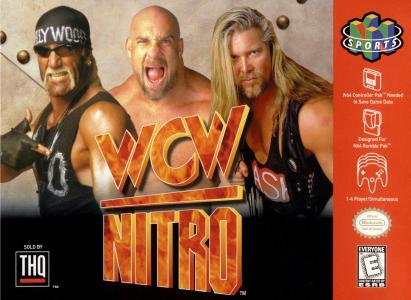 Go for the gold, as you take on the Superstars of WCW and the NWO in Singles, Tag Team or Battle Royale competition! Set the stage - Fight in arenas from WCW's biggest events, including WCW Monday Nitro, Starrcade, and Halloween Havoc. Plus, TONS of hidden arenas, secret "run-in" characters, Nitro theme music, and brawling in and out of the ring! Who's next? You are, when you step into the ring with WCW Nitro, the fastest wrestling game to hit your N64! Take control of over 60 WCW and NWO Superstars! Dozens of devastating moves per wrestler, including trademark maneuvers, taunts, and finishers!