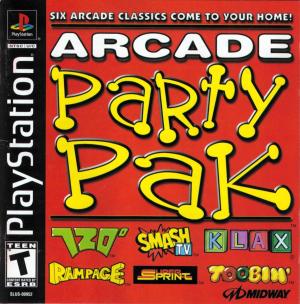 There are six retro games featured on this disc including Super Sprint, 720 Degrees, Rampage, Toobin', Klax, and Smash TV, each originally released between 1986 and 1990. 720: Skate or Die! Perform radical stunts on your skateboard to gain points and enter special events! Show off your skills with gravity-defying tricks! You could even be the one to pull off the difficult 720! RAMPAGE: The original crunch, punch and munch game takes a bite out of America! While you watch out for the Army and other players, terrorize cities by bashing buildings, crushing cars and snacking on citizens! KLAX: It's your brain against Klax in this highly addictive puzzle game! Stack blocks according to color either horizontally, vertically, or diagonally. Match tiles to get a Klax and eliminate them, but don't let the blocks reach the top! Get multiple klaxes to increase your points, if you've got the skill! TOOBIN: Jump in your Toob and ride down the rapids at gut-wrenching speeds! Face some of the most intense courses ever: Earth's rivers, Martian canals, Jurassic swamps and even the River Styx! Keep your eyes open and steer clear of obstacles and enemies before they damage your toob. SMASH TV: You're a contestant in the most violent game show on the planet! With futuristic weapons and power-ups, fight against the ever-increasing hordes of enemies. Play alone or team up with a friend in your bid to survive the constant onslaught. SUPER SPRINT: Frantic racecar action is the name of the game! It's dog-eat-dog in the race for first place. In preparation for the more difficult tracks, use your prize money to upgrade your vehicle with better handling, higher speed or faster acceleration!