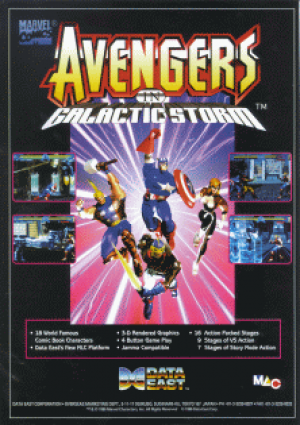 Avengers in Galactic Storm (アベンジャーズ・イン・ギャラクティックストーム?) is a 1995 fighting arcade game developed and published by Data East. It features a single or two-player story mode or multiplayer head-to-head mode, and was the first modern fighting game to feature assistant characters commonly referred to by gamers either as "helpers" or "strikers". The game is based on characters in the Marvel universe, primarily the The Avengers but also the Kree. The game's plot and roster of playable characters is based on the Operation: Galactic Storm story arc. Before their bankruptcy in 2003, it was one of Data East's last fighting games, as well as their third and last game based on The Avengers after their two 1991 video games: the Captain America and The Avengers Beat 'em up arcade and the NES platform game of the same name. On February 26, 1996, Pony Canyon and Scitron Label added the background music of Avengers in Galactic Storm with the background music of another Data East MLC System title, Skull Fang: Kuhga Gaiden, both into an album titled Skull Fang / Avengers in Galactic Storm, which was released exclusively in Japan.