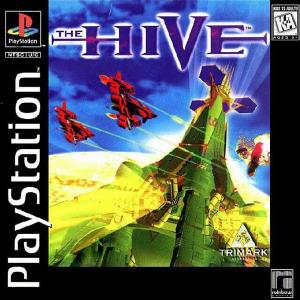 Your objective in Hive is to pilot your way through 20 scenes of action, shooting anything and everything in sight. Along the way you must perform tasks like flying over the peaks of a mountain range, negotiating a glide path with fire all around, blasting your way through buildings, and much more. The action takes place in and around a number of outer space locations, including an Ice Planet, a Hangar Bay, an Ocean Platform, a Pyramid Maze, a Moon Base and the Queens' Chamber. An evil empire by the name of NoirDyne Corporation has reactivated The Hive, a once abandoned bioweapons production facility. This dreadful place, which is run by genetically engineered creatures called Hivasects, is producing a toxic substance to be used as a biological weapon of mass destruction. As Federation agent Max, you have been ordered to infiltrate NoirDyne, destroy The Hive and save Ginger, your captured partner who manages to send you brief, but helpful data loads. The Hive boasts unique "Panoractive" capabilities in which you are able to turn your ship a full 360 degrees while blasting away at the many obstacles you will meet, such as enemy viper ships, vicious ground troops, robot weapons and deadly alien Hivasects. The Hive lets you select from four difficulty levels and is equipped with a progress-saving password for each scene.