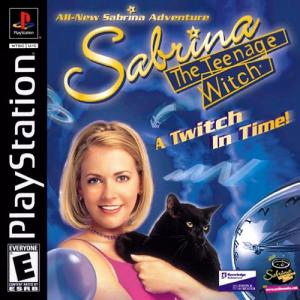 Sabrina the Teenage Witch: A Twitch in Time!

Sabrina has been delighting fans with her benign brand of arcane mischief since she was first featured as an Archie comics character in the late 1960s. This title is based directly on the version of the character from Sabrina: The Teenage Witch on ABC and the WB networks. Melissa Joan Hart provides the voice and likeness of Sabrina in this 3D adventure based on the live-action television series. A third-person perspective allows players to guide Sabrina around a large interactive game environment. Real-time gameplay keeps the challenges fresh and the action moving. Sabrina's aunts and her cat Salem are also featured in the game. The game's plot is about when Salem was trying to get his file from the Witches' Council he broke a clock to release Chaos. Now Sabrina has to save the day while dressing up in ridiculous outfits and fighting stationary enemies.