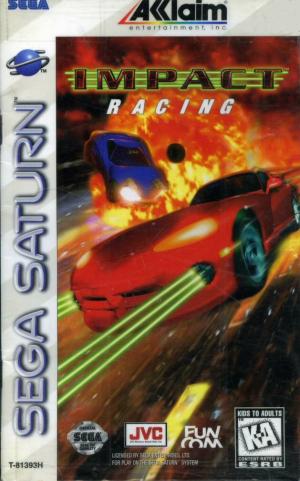 Part automotive racing, part shooter, Impact Racing lets you choose from five different cars which vary in degrees of speed, power, engine size, payload, armor strength, and grip. While racing on any of the twelve tracks, your car is capable of destroying other vehicles in its path. Each of the five cars is equipped with an endless supply of laser beams. During the race you can add to the arsenal by collecting heatseekers, mines, exploding firewalls, concussion missiles, and smart bombs. You can also pick up extra time and armor along the way. In order to progress through the game and race in bonus rounds, you must complete the courses and destroy a certain number of cars during an allotted time period.